When in Rome…don’t do as 10 million other tourists do. Don’t limit your Rome experience to only visiting the classic tourist attractions.
Colosseum, Trevi Fountain, Roman Forum, Pantheon…yes, they are amazing and definitely deserve all the fuss, but there is much more to Rome than queuing for hours to enter the Colosseum or taking a picture through someone else’s tablet at Trevi Fountain. Rome is full of hidden gems.

History and art is around every corner. You might be passing a little sculpture or a hidden fountain without even realising that it’s thousands of years old and it has historical meaning. Unfortunately, well, fortunately for Rome and for you reading this blog post, the most famous constructions and works of art overshadow the less known wonders and masterpieces and attract millions of people.

Luckily, you can get off the beaten path, escape the crowds and visit equally interesting and fascinating hidden gems of Rome. And it will be easier than you think, because Rome is full of them.

The ones presented here are in the city centre or very close to the city centre, so there will be no need to travel far and waste your day on commuting.

From optical illusions to quirky neighbourhoods, discover my favourite:

1. Pyramid of Cestius
A pyramid in Rome? Yep, that’s correct! Among all the other Roman architectural heritage, you can also find a pyramid. And it’s not even such a hidden gem. Just standing alone next to a big road junction and subway station, the ancient Pyramid of Cestius often gets overlooked.

The 36 meter (118 foot) monument, dates back to the first century BCE and was built as a tomb for the famous Gaius Cestius. The interior chambers of the pyramid are only open on the third and fourth Saturdays and Sundays of the month (reservation required), but you can admire it from the Non-Catholic Cemetery located behind the Pyramid. Keep in mind though, that the cemetery closes at 5 pm on weekdays and Saturdays (at 1 pm on Sundays).

Unfortunately, since it was the very first place I went to see in Rome, I didn’t do proper research and missed all the opening hours, but it’s still a great place to pay a visit to.

2. Art museum Centrale Montemartini
Museum of sculptures and archaeological findings in Rome…yeah, nothing original, right? But what if the sculptures are displayed alongside giant diesel engines and steam turbines and it’s all located inside a former power plant?!

Unless it’s the Louvre, MET or Prado, I usually avoid visiting museums during city break trips, especially if it’s a modern art museum – a painting of a square…what even is that? But Centrale Montemartini sounded so interesting that I had to pay a visit.

The old and the new, the delicate and the crude, the art and the practicality – those contrasts somehow make a great complete whole and are the reflections of the many identities of Rome. From a spiritual centre to a modern city run by steel and steam.

Centrale Montemartini was really created by accident. During restructuring of the Musei Capitolini, ancient Greek and Roman sculptures were moved to the Centrale Montemartini for a temporary display: Machines and Gods. The exhibition did so well though, that it was decided to leave the Greek and Roman gods in the power plant permanently. Nowadays the ancient art in a former electricity station attracts tourists who are willing to venture off the beaten path and admire Rome in a different setting.

Online purchase of tickets is recommended, but not mandatory.

3. Monte Testaccio
This was one of Rome’s hidden gems that I was most excited to see. Unfortunately, it didn’t work out, because it’s another place that is only open for reservations.
But a hill made of ancient Roman pottery! How cool is that?

The Romans obviously had an enormous appetite for olive oil, far outrunning local resources. As a result, the olive oil had to be imported from across the Empire and the neighbouring countries. Since the “bottles” (amphorae), which the oil was transported in, were poorly made, they couldn’t be reused. Therefore, after being emptied in the nearby river port, the amphorae were dumped at this site creating a fascinating ancient landfill.
But Monte Testaccio was not simply a random waste dump. Excavations prove that it was a highly organised and carefully engineered creation. Well, it had to be, since it’s been estimated, that the hill may contain up to 53 million amphorae. Built on purpose or not, nowadays Broken Pot Mountain has become a unique and fascinating hidden gem in Rome.

If you organize it well, you can combine visiting the Pyramid of Cestius, Centrale Montemartini and the Broken Pot Mountain – they’re not that far from each other.

4. Trastevere
Located on the other side of the Tiber River, Trastevere became one of the city’s most cool hangouts. Originally home to the working class, now full of tourists wanting to admire the prettiest streets in Rome and have the real Italian experience. Cobblestone, narrow streets, rustic orange buildings draped in vines, charming piazzas – Trastevere gives you a truly local feel. You can also find there some of Rome’s best restaurants, traditional pizzerias and classic Italian bars. But if you’re looking for more of a hipster vibe, such as craft beer bars and vegan food, Trastevere offers that as well.

I actually stayed in Trastevere during my trip to Rome. My Airbnb was located in one of its cutest streets. Not knowing much about this neighbourhood before, I couldn’t be more happy with my accidental choice. Pizza in slices from the super local Pizzeria La Boccaccia was a must for breakfast everyday.

This not so hidden gem in Rome is definitely worth paying a visit or even choosing it as your Rome home base.

5. Gianicolo / Janiculum Hill
If you’re already in Trastevere, make your muscles burn off the pizza and gelato and climb The Janiculum. Gianicolo (in Italian) offers one of the best views of Rome.

Although it is the second tallest hill, Janiculum is not included in the famous Seven Hills of Rome, because it’s located outside the ancient city walls. That’s why it’s called by many: “the eighth hill”.

Janiculum is definitely the most peaceful and refreshing hidden gem in Rome. The main attraction there is the Piazzale Garibaldi with a monument to Giuseppe Garibaldi, but it’s the views that will take your breath away. So simply stroll around, enjoy the pleasant atmosphere and feed your eyes with spectacular views of the Eternal City.

6. Via Nicolò Piccolomini
Visiting this Rome hidden gem is very conditional. You should go there only IF you have the time and only IF you have a zoom camera lens. Well ok, zoom lens is only necessary if you want to properly capture the phenomenon happening there.

Via Nicolò Piccolomini is a residential street that offers an optical illusion of Rome’s most famous duomo – the dome of St Peter’s Basilica. When you stand on this street you only see the dome, not the church. It appears to be sticking out of nowhere. But the phenomenon is, that the further away from St Peter’s you get, the bigger it seems to become. And the other way around.

That’s why to capture this illusion with your camera, you need to shoot from far away with at least a 200 mm zoom lens.

This place is also quite far off the beaten path. I actually scooted there from the Janiculum, but I do not recommend doing that – you scoot along a busy road with no sidewalk. The closest metro stations is: Baldo Delgi Ubaldi. Or you can get there by train to San Pietro station.

Where to Find it

7. The Church of St. Ignatius of Loyola
Rome has like billions of churches, but Chiesa di Sant’Ignazio is something special. Located in the city centre, the church of Saint Ignatius delights with an unexpected feature – a fake dome!

Designed originally with the dome, due to lack of funds the church had to be built without one. But there’s nothing creativity can’t fix. Instead, the artist Andrea Pozzo was hired to paint an illusion of a dome on the flat ceiling. He did an amazing job, because the dome looks very convincing. You can see it best in the mirror installed in the middle of the church and even give a donation to see the dome lit up.

Personally, visiting Saint’Ignazio and admiring the fake dome was way more fascinating than strolling through the splendorous Vatican corridors.

8. Circus Maximus
I wouldn’t necessarily call this place a hidden gem. It’s so huge, that in no way it could be hidden anywhere. But after strolling through the extremely busy Colosseum area, Circus Maximus is a site that offers some peace and quiet…well, let’s say.

Circus Maximus, located in the valley between the Palatine and Aventine hills (10 min walk from Colosseum), is the oldest and largest public space in Rome. It used to be the first and the largest Roman stadium. Built in the VI century BCE, and developed under Julius Caesar, Circus Maximus was used for chariot racing, as well as Roman games and gladiator fights. Nowadays it functions as a large park area and it’s often used for concerts and meetings.

But for you as a tourist, Circus Maximus is a perfect location to chill and relax during a busy day of sightseeing. Grab a cold drink or even something to eat and just sit on the grass admiring this huge area and imagining all activities that have happened there. Or maybe not, because they all seem pretty brutal…animal hunts or executions…I don’t want to look at that while eating.

WHERE TO FIND IT

9. Mouth of Truth
When leaving Circus Maximus, don’t forget to stop by The Basilica of Santa Maria in Cosmedin to catch a glimpse of another hidden gem in Rome: the Mouth of Truth. This huge marble face has its own legend. Supposedly it’s a lie detector. If you place your hand in the open Bocca Della Verita and you’re telling a lie, the mouth will bite off your hand.

Some say (including my boyfriend) that it’s the most over-rated hidden gem in Rome, but to me it seems kind of interesting. It’d be probably better if I could actually approach it, instead of taking this shot through the gate, but of course as always, I missed the opening hours.

And that’s all I’ve got!

4 days in Rome weren’t enough to visit all the secret places, especially that a big part of them are outside the city centre, but hope you enjoyed my little guide to the 9 hidden gems in Rome. My favourite ones were: the Art museum Centrale Montemartini and Janiculum viewpoint, so if you only have time for a couple hidden gems, make sure to find your way there.

If you’re planning to combine your Rome city break with exploring incredible Tuscany, check out my tips for stress-free driving in Italy and find out where to take the most beautiful Tuscan pictures.

If you have any questions, hit me up on Instagram. 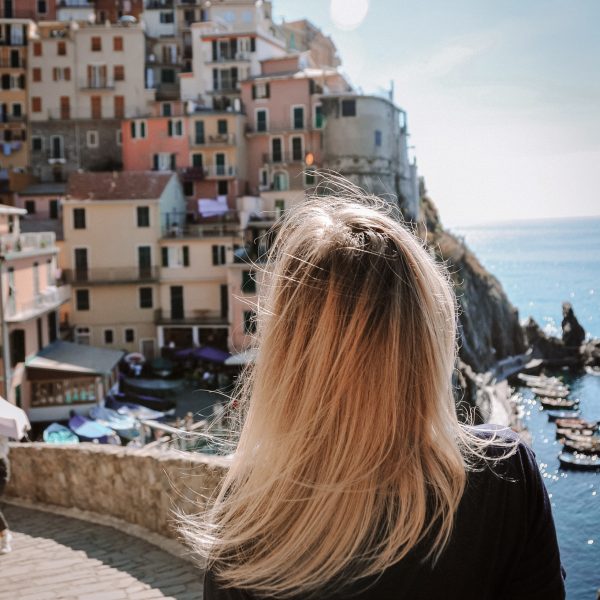 Driving in Tuscany – useful tips for stress-free driving in Italy 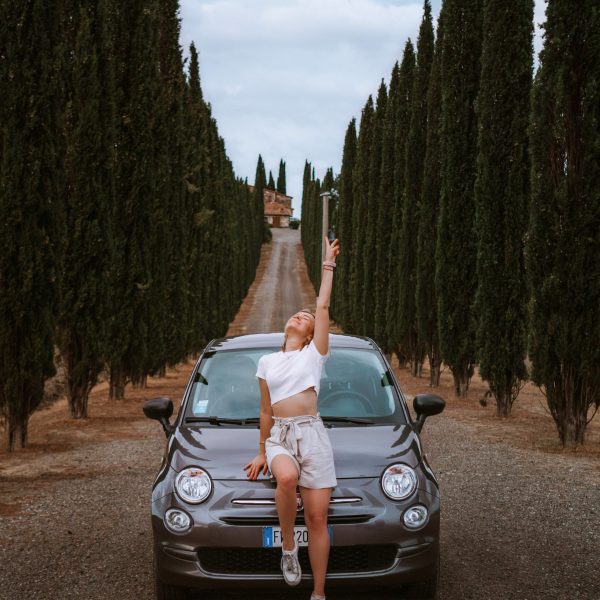 How to make the most of two days in Cinque Terre, Italy 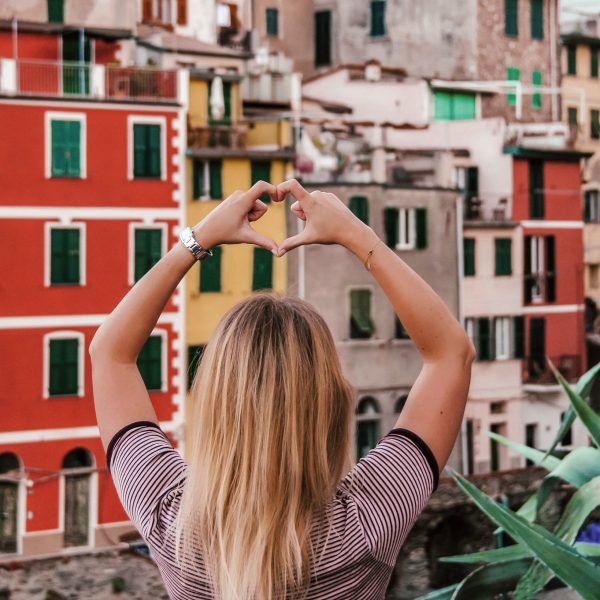