Tuscany is perfect for a road trip.
Otherwise I don’t know how you’re going to see it all. There are many areas in Tuscany where a car seems to be your only option.
But whether you’re a road trip freak or road tripping is not your thing, driving through the beautiful Tuscan landscapes will be a treat for your eyes and soul. Endless hills, picturesque fields, rows of cypress trees and grapevines…oh Tuscany, I miss you already.

However, there are a few things to know about road tripping in Tuscany and driving in Italy in general. Keep reading my guide to driving in Tuscany to be best prepared for your Tuscan adventure.

Renting a car in Italy.

There’s one thing that is crucial while road tripping in Italy and this thing is: a car. Gotcha!
Renting a car in Italy doesn’t differ from renting a car in any other country. You need a credit card, you need to be at least 21 and you need insurance. I’d definitely recommend renting a car from one of the bigger European rental companies like: Hertz, Avis, Budget or Sixt. While using a smaller and unknown company might be tempting – prices can be distinctly lower – after reading their reviews, you’ll know why.

If you want to avoid overpaying, rent a car from a bigger city or even better – from an airport. After checking many rental options while planning our Tuscan road trip, renting a car from the airport right after arriving, was way cheaper than taking it from one of the smaller Tuscan rental locations.

And last but not least, there’s no way you can hit the road without insurance. It doesn’t have to be the one bought from a rental company. We usually use MoneyMaxim to find the best deal. And even with our little “attempted car theft” adventure while road tripping in Puglia, we got a full refund.

Oops, I hope I didn’t scare you. Visiting an Italian police station was actually a funny experience.
But yes, the truth is, that car theft or attempted car theft might happen in Italy, especially in the southern regions. That’s why having full coverage insurance is crucial.

While we’re on this topic, let me provide you with some Italian road tripping safety tips.

Some of them will sound like: “duh! Do you think I’m stupid?”, but it’s better to make everything clear:

Despite many stereotypes about crazy Italian drivers, driving in Italy isn’t as scary and dangerous as you might think.
Yes, it’s true that:

Despite all of that, Italians usually seem to have control over their cars and Italy isn’t high on the list of countries with the most car accidents.
But just to be safe, don’t follow the locals – I can guarantee you’ll recognize a local by their style and speed of driving – keep to appointed speed limits and follow the signs.

What else do you have to keep in mind while driving on Italian roads?

What struck me the most, was how short entrances and exits to and from highways are. Because of high speed and not enough space, sometimes Italians will literally force their way in front of you when entering a highway, but you stay away from such practices. If there’s too much traffic and there’s no way you can merge smoothly, just stop at the end of the lane and wait until it’s safe to enter.

All highways – roads marked as autostrade, are toll roads. And I have to say, they’re not cheap. Driving to Tuscany on an approx. 100km long stretch, we paid 9 euro. You can avoid the expense and find a toll free road, but when time is crucial, it’s better to pay and enjoy the usually 3-lane autostrade.

Refuelling your car is…kinda weird. During our 2 Italian road trips we’ve been to 3 gas stations, of which 1 was attended (staff do everything for you while you wait in the car – old school, I know!) and 2 were self-service. But fully self-service, meaning you pay in a machine. How it works is, you put your credit or debit card in, it takes 100 euro deposit, then you fill up your car and the remaining money is returned to you. When you do it the first time it’s a bit confusing and time consuming, so keep that in mind when refuelling your car before giving it back to the rental company.

Ohh, and the lights. Headlights must be turned on all the time, whether it’s dark or light.

Alright, now when we have all the basics covered, let’s get to the main topic of this blog post:

What do you need to know?

That you might get easily distracted by scenic landscapes, spectacular cypress trees and rows of grapevines leading straight to the wineries. Ok, the last one is not true. I mean there are endless rows of grape vines, but they don’t necessarily lead to the wineries.
My point is, that even though the scenery is gorgeous, you might want to keep your eyes on the road, because they are quite narrow, hilly and curvy. So the smaller the better – I’m talking about choosing your rental car –  would be the way to go while deciding on your vehicle.

If you struggle with motion sickness, I’d recommend popping a pill. Although make sure it won’t make you sleepy. You wouldn’t want to miss the Tuscan beauty.

Despite going up and down most of the time, the roads in Tuscany are usually in great condition. It changes slightly when driving more south – the more south you go, the bumpier they get.

Unless you’re Lewis Hamilton (or a local), there’s no way you could speed while driving in Tuscany. However, when a road gets flatter and straighter and the temptation to push the gas pedal appears, you might want to reconsider and hit the brakes instead. There are many speed cameras along Tuscan roads and the funniest thing is, that you won’t necessarily notice them. Even though we were never speeding, there is a chance we had a picture of our lovely faces and our license plate taken, especially when driving into the towns where the speed limit might suddenly drop to 30 km/h. Usually, when you’re approaching a speed camera, you should see a blue sign saying: “controllo elettronico della velocita”. When you spot it, hit the breaks.

Despite the roads being narrow and windy, there are many spots along the roads, where you can stop and admire the views. And I’m sure you’ll use them a lot, because there’s a lot to admire. Colourful fields, endless hills, windy roads flanked by cypress trees leading to magnificent houses…there are so many incredible views in Tuscany.

If you decide to chase a particular, must-see Tuscan photography location and you’re not entirely sure how to get there, don’t always trust Google maps. Better switch on the satellite view and make sure that the roads Google is leading you on, are actual roads, not some off the beaten tracks.
It happened to us while chasing the famous Cipressi di San Quirico d’Orcia. As we weren’t able to park in the usual tourist parking place for this landmark (it was closed for construction work), we tried to find another way to get there, and man…it didn’t go so well. We ended up driving on some really bumpy, little dirt roads and gave up in the end. Damn you Cipressi!
That’s why, my only photo of the famous Cipressi is from the car window.

Watch out for animals!

Keep in mind, that in Tuscany there are usually no lights along the roads. I’m taking about the countryside roads which you will usually drive on. Of course, villages, towns and cities are perfectly lit. But you have to be especially careful while driving at night because of wild animals. Whenever you see a sign that deer or wild boars might be in this area, don’t underestimate it and don’t speed. We saw a lot of wildlife during our trip in Tuscany and several times something ran in front of our car while driving.

Know where to park!

If you ever did a road trip in Italy you probably know what a ZTL is. If not, let me explain.
Limited traffic zones (Zona a Traffico Limitato) are found in most major Italian cities. They’re used to reduce congestion in high traffic areas and make them more pleasant for pedestrians and residents. Driving into a ZTL without the appropriate authorization will end up with a huge fine, because, as soon as you enter such zones a camera takes a photograph of your licence plate. If the plate doesn’t appear on the list of permitted vehicles, a fine is automatically issued. Luckily, parking in Tuscany was way easier than during our road trip in Puglia. Just outside every Tuscan town (or historical town centre) there are proper parking areas, where you can leave your car and go explore the beautiful places on foot. Sometimes they’re free, sometimes you have to pay a few euro, but it’s totally worth it. You wouldn’t like to leave your car somewhere along the road and worry about it. And driving into the towns is a definite no no as well. Most of them are ZTLs.

Ufff, I think that’s it!

Hope you can find this little guide to driving in Tuscany useful. And all this knowledge will make your Tuscan adventure a little bit easier and even more pleasant.

If you have any question, hit me up on Instagram!

Florence from above – the best viewpoints in Florence, Italy 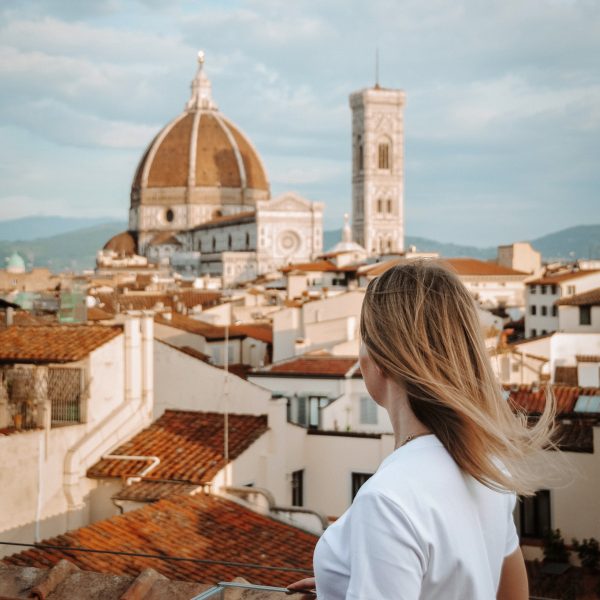 8 most iconic photo locations in the Tuscan countryside 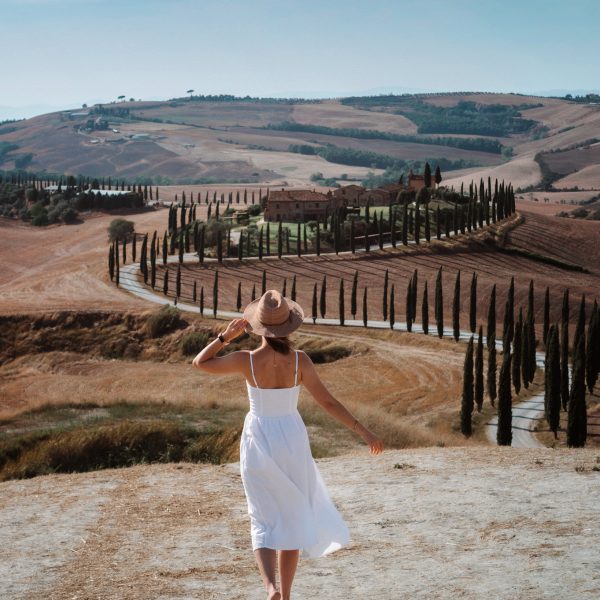 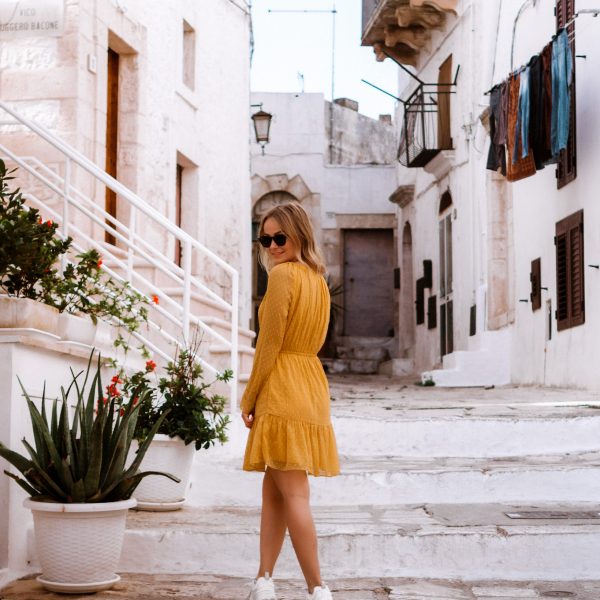 The biggest lie I tell myself is: "I don't need to

Wearing heels is not sexy if you walk like a newbo

I'm the kind of person who keeps calm under pressu

If we were meant to stay in one place, we'd have r

Stop trying to make everyone happy. You're not a b